The cannonade of Candi on "the wrong side of history

1. On a tank through Kebumen.

"A cannonade on Candi-Karanganjar in October 1947? That is impossible!", exclaimed the 90 year-old veteran, JF. He knew that in October 1947 there was still a ceasefire after the first large Dutch military offensive had ended in August 1947. The second would start a year later, on December 19, 1948. Only after showing him the battle report posted in my previous Blog, he was able to accept the fact. 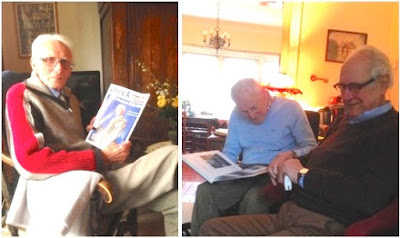 The three veterans, J.F. (with the veteran magazine "Checkpoint"), G.K. and F.vB., whom we met in the house of one of them. We would meet them again during their reunion on May 10th, 2017.

The three veterans whom we spoke, were not yet in Indonesia at the time of the cannonade on Candi, October 19, 1947. They arrived on March 31, 1948 and were assigned to a tank peloton of the 6th Escadron ("Vechtwagens"; fighting vehicles) of the KNIL-battaljon Infantry V, "Andjing Nica". J.F. was tankgunner. During the second military offensive on December 19, 1948 ("Operation Kraai") he drove from Gombong, through Keboemen to Poerworedjo. He couldn't remember that there was any fighting in Keboemen. See, however, the photograph below and a Youtube movie in which we see Ravie Ananda interviewing people that still remember how the Dutch army entered Keboemen: https://www.youtube.com/watch?v=GtQtughlifM 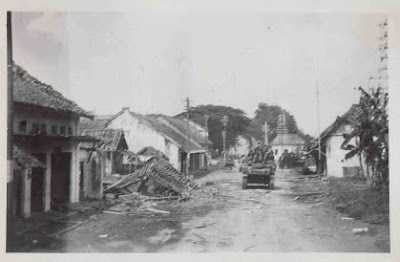 Ravie Ananda wrote to me on facebook, 18th of March 2017. (I somewhat changed and shortened his english text): 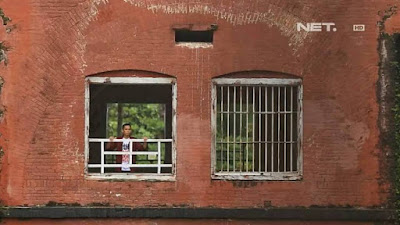 Ravie Ananda standing in the open window. He wrote under this picture of Fort van der Wijck (Facebook 18 March 2017): "Independence is absolutely not a gift, but a hard struggle to break the iron bars and thick walls of colonization!"

I answered Ravie Ananda that the recent Dutch studies about what happened in the 1945-1950 war (by Oostindie, Limpach and others in the institutes of KITLV, NIMH and NIOD) would eventually lead to a de jure recognition by the Dutch people of the 17th of August 1945, as Indonesia's day of independence.
De facto, however, this date has already been politically and morally recognized by the Dutch government in 2005, when the minister of foreign affairs, Ben Bot, gave a speech during Indonesia's celebration of 60 years of independence. In that speech the minister admitted that the Netherlands had stood "on the wrong side of history" when executing its colonial war of 1945-1950. At the time, the Dutch had not understood and could not accept that their role as colonizer was played out. Ben Bot added that he wanted to make it clear to Indonesia that the Dutch people are starting to realize and to accept that the independence of Indonesia already started on the day of August 17th, 1945.
(During the subsequent war the number of deaths on the Indonesian side is estimated to reach the 100.000 or even 150.000, including victims of mutual struggle of the various Indonesian warring parties. The Dutch army lost 6226 people according to the National Indies Monument in Roermond, the Netherlands.) 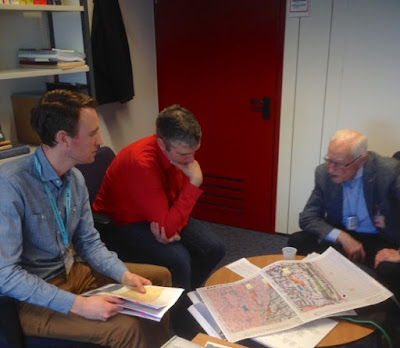 From left to right: Azarja Harmanny, Rémy Limpach and Map de Lange, studying the military map of the Karanganjar region. 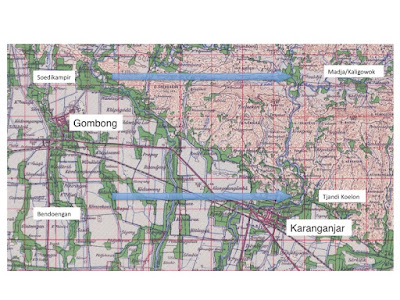 Cut-out from the map "Gombong", page 45XLI_C, showing the shooting direction by the three artillery batteries north and south of Gombong.

3. Visit to the NIMH together with the veteran Map de Lange

On March 15, 2017, I visited again the NIMH (Netherlands Institute for Military History) with the veteran Map de Lange, whom I didn't know yet. Together with Rémy Limpach and Azarja Harmanny we watched in full length the documentary "Tabee Toean" by Thom Verheul (1995), which Map de Lange had brought with him.
But first, we looked at the military maps Azarja had obtained: he told us that the coordinates given in the battle reports showed that there were three artillery batteries, two positioned on the road south of Gombong (near Bendoengan), shooting east to Candi (Tjandi Koelon; coördinates 04.41) and the third one positioned north of Gombong (near Soedikampir), shooting east to Madja and Kaligowok (coördinates 05.45).
Then, we watched together for 85 minutes the movie "Tabee Toean" (goodbye mister), made by Thom Verheul in 1995. Many times the movie was stopped to allow Map de Lange to explain issues about backgrounds and soldiers he had known (e.g. Wim Schot).
In the movie we saw how an artillerist of 3-6-RVA (field artillery), Henry Pezy, went back to Gombong, where "12 cannons had been positioned firing about 3000 grenades on Karanganjar." He wanted to inform himself about what had happened to the people there. Together with Edith Sapumo, who as a child had survived the bombardment, he returned to Candi and placed flowers at the monument in memory of the 786 victims of the shelling (see previous blog). 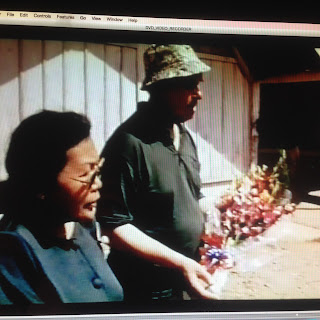 Edith Sapumo accompanies the veteran Henry Pezy in 1995, when he brings flowers to the monument at the market place of Candi (Tjandi) in memory of the deceased during the cannonade of 19th October 1947.
Stll from the movie "Tabee Toean" of Thom Verheul.

It appeared that Map de Lange was one of the Dutch soldiers who was critical towards the war when participating in the second Dutch military offensive starting on 19 December 1948 and other military actions. He described his adventures and those of his unit in a manuscript entitled: “Conscripted between  Domination and Impotence” (Maassluis, 2007; with reference to the memorial book of 5-6RI,1950). It is an impressive account of a former conscript soldier who, thanks to his leftist political background and critical conscience, stood moraly "on the right side of history". Nevertheless, he fulfilled his duty, stayed with his comrades and participated in the war as orderly writer ("ordonnans/schrijver"). In his opinion he had to stay "on the wrong side of history". In consequence, he considers himself to be co-responsible for the excessive violence committed by others in their own and different situations.
By reading his manuscript, I learned quite some aspects and insights that were new to me. For instance, about the great support the soldiers of many battaljons (like the one Map de Lange served for) gained from their religion, either catholic or protestant. Religion was one of the pillars that taught them that the Netherlands was the only legal authority in the Dutch Indies and that the authority was granted to them by God. As a consequence, Dutch authority in the colony had to be restored first before the Netherlands could consider any political changes. In part, this philosophy is reflected in a pamphlet issued at the start of the second military offensive, signed by the Army Commander S.H. Spoor. 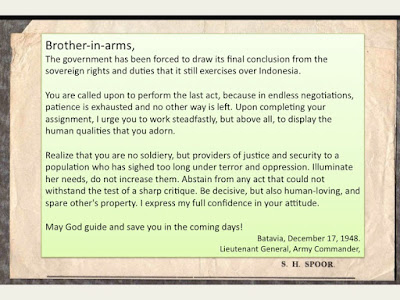 Pamphlet, translated from dutch, given to the soldiers at the start of the second military offensive. (See: https://sites.google.com/site/zesdeeskadron/5-de-tweede-politionele-actie-deel-1).

The progressive background of Map de Lange convinced him that the former resistance fighter against the Germans, Henk van Randwijk, was right in accepting Soekarno as a negotiator. The fact that Soekarno had been banned by the Dutch authorities first to Flores and later to Bengkulu (Sumatra) already long before the war, had pushed him into collaboration with the Japanese, for which he could hardly be blamed. I remember how my father would explode when I expressed such views in the 1960's.
Map de Lange also describes how the Dutch soldiers, during the surrender of the Dutch army to the TNI (Indonesian National Armed Forces) on 19 October 1949, found out that their former enemies (called "peloppers") were different from the bloodthirsty mobsters they had expected them to be. How different is his story from that reported by Alfred Birney in his autobiographic novel "The interpreter of Java" (Dutch: "De tolk van Java". 2016. De Geus), in which he describes his father's adventures and fightings in a colonial war in which racism, hatred and crueltry seem to have played a major role. Just recently, Alfred Birney received the 2017 Libris-prize for the best Dutch novel. In my view, this is primarily because of his description of his family life in the Netherlands with his traumatised father and his white Dutch mother who, deep in her heart, feels an aversion towards her indo-children.

4. Visit to the reunion of the 6th Eskadron KL/KNIL

On May 10th, the Cavalerist R.Wartena and I visited a reunion of the 6th Eskadron Fighting Vehicles in the Bernhard Kazerne (Amersfoort). The veteran J.F. introduced us to his comrades and I told the audience that I was primarily curious about their experiences in Kebumen, because young Indonesians were interested in this history, which is being described on the extensive website of Ravie Ananda (https://kebumen2013.com/category/sejarah/). 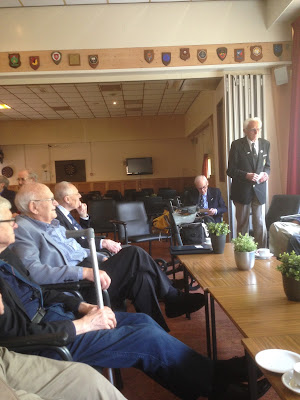 The veteran J.F. at the reunion of the 6th eskadron Fighting Vehicles in the Bernhard Kazerne (Amersfoort.

I also told them that in the surroundings of Kebumen several monuments had been placed to commemorate the Dutch agression and I showed them the pictures of the new bridge in Kebumen and of their staging of the execution on the tennis court of the Mexolie factory (see also my blog: http://woldringh-naarden.blogspot.nl/2016/02/bezoek-aan-dordrecht-tussen-groningen.html).
Some of the veterans came with lively stories about accidents and killings, others said that they couldn't remember Kebumen. One of them didn't want his name to be mentioned, because he still wanted to visit Indonesia and was afraid that they wouldn't let him in...... 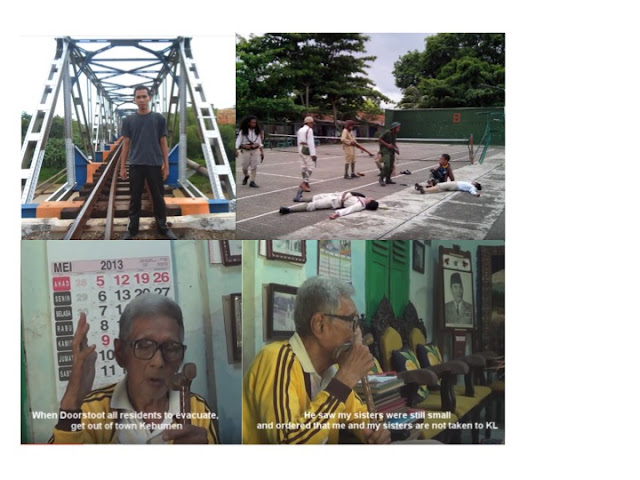 Upper left: Ravie Ananda standing in front of the renewed "Renville bridge" near Kebumen, which had been demolished during the decolonization war.  Upper right: Staging of the execution of 4 people on the tennis court of the Mexolie factory in Kebumen during the second military agression in December 1948. Below: HeruSubagyo tells how he and his little sisters were saved during the war by a dutch officer. 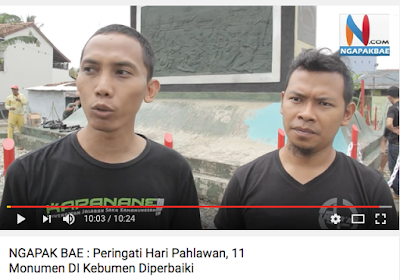 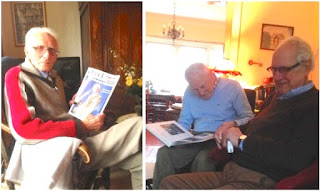 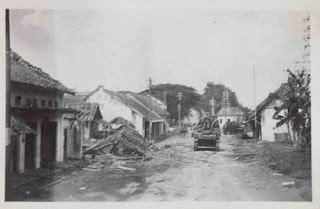 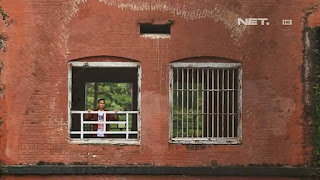 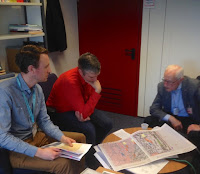 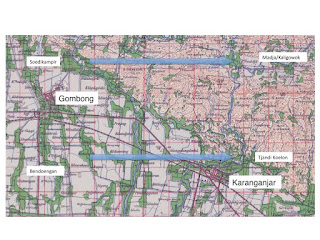 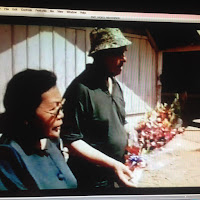 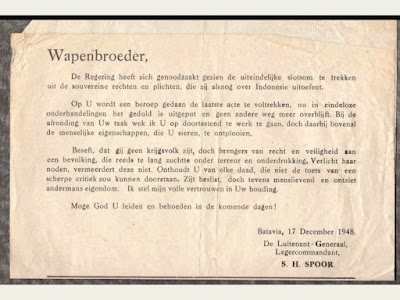 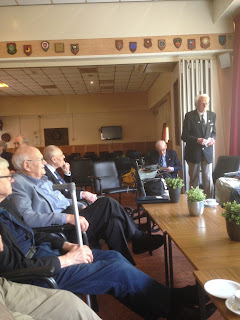