In 1969, soon after starting my PhD-study at the Laboratory of Electron Microscopy, we were visited by LeRoy Bertsch who worked with Arthur Kornberg (1918-2007) at Stanford. He was staying in Zürich and was considering to come to our lab in Amsterdam for a second half of his sabbatical.
As a DNA-biochemist he was interested in the possible connection between the bacterial chromosome and the plasma membrane in Escherichia coli. He was attracted by the new technique of freeze-fracturing developed in Zürich and applied in our lab to bacteria by Nanne Nanninga.
I was thrilled by this great, gentle american, who also showed interest in my project on the effect of detergents on the structure of the E. coli nucleoplasm (nucleoid). I remember how he criticized my work in a very quiet but knowledgeable way. Although I now see with great astonishment that I did not acknowledge him in my very first paper in 1970, I vividly remember how he helped me with writing and composing it. I acknowledged him at least in one of the last papers I discussed with him (on DNA segregation; Mol. Microbiol. 33, 959, 1999) for his corrections and advice. 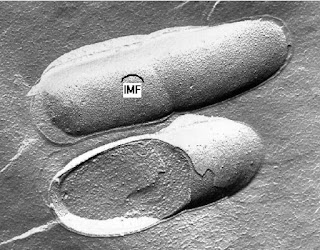 Electron micrograph of a shadowed replica from frozen and fractured E. coli cells, showing the inner membrane face (IMF) of the plasma membrane.

He decided to apply the freeze-fracture technique to plasmolyzed E. coli cells. On Saturday(s) I would bring him and his two sons from their house in Laren to the lab. While patiently waiting for the machine to reach vacuum, I still see them playing their different recorders in that gruesome freeze-fracture room.

Several years later, coming with my wife and friends to an Asilomar conference, we enjoyed the most generous hospitality of LeRoy and his wife Mary Grace. Many visits to Bryant Street and the lab would follow. Every time when attending the group meetings at Stanford, I was impressed by the presentations of the students, the remarks of Arthur Kornberg and by the discussions with Arthur and LeRoy afterwards. 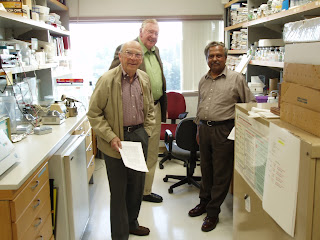 Once, when visiting Amsterdam around 1989, I told LeRoy that I wanted to measure the superhelicity of chromosomal DNA under different growth conditions by using plasmids. Thoughtful and patiently he explained to me the pitfalls of such isolations and measurements. Later, when understanding more about DNA-topoisomers, I was grateful for his advice which I had followed up: "Don't go into that technical jungle!"

But he did not only point me the way in DNA biochemistry. For Lidie and me, LeRoy and Mary Grace showed us "the american way": how to hold and eat a big Hamburger and to enjoy a real milkshake; they explained us american football and politics, showed us Yosemite and Monterey and told us stories about the civil war and "el Camino Real". Later, when long walks had become too difficult, he waited patiently in his green colonels-car until I had spotted my birds at, for instance, Elkhorn Slough or Pinnacles National Parks. 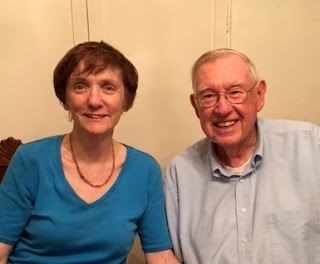 We will remember their unsurpassed hospitality in Palo Alto, which included lending us their VW-bus in 1974 for a drive throughout the South-West and Mary Grace's Toyota in 2014 for visiting San Diego; LeRoy's carefully prepared oranges for breakfast; during our walks Mary Grace's stories about computer-celebrities in their neighborhood; their friendliness and friendship.

Mary Grace, we hope to see you soon again!