Kebumen, past and present 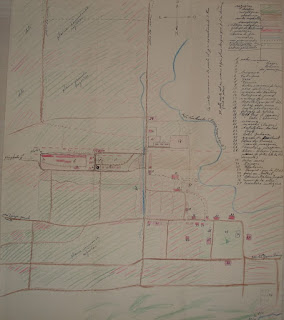 Map of Kebumen, drawn by my parents in April 1934. As indicated by the compass, North points downward.

Immediately after their arrival my father started to work in the Mexolie factory close to their house. He had to do administrations but, knowing some chemistry,he was also involved in checking the quality of the oil and in producing by-products. 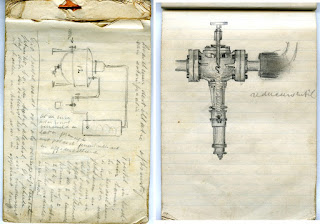 Notebook with protocols (e.g. for saponification of butyl alcohol) and a drawing of a reducing valve.  How did this little booklet (10x16 cm) survive the Japanese camps?  We will never know....

Batak intermezzo
My aunt Vivian Woldringh-Coster (born 11 December 1927 in Bandung) lived until about her fifth year in Parapat and later in Tarutung near lake Toba in Sumatra. A year ago she told me what she remembered while showing me an album with photographs. When I showed these pictures to Julia Tampubolon, who was born and raised there, she could recognize most of the locations!

Pictures from the album of Vivian Woldringh-Coster. Left: Vivian (~4 yrs) with a governess from Suriname. Right a kampong near Banuarea; the tree could be from the Durian.

On September 3, 2015, I went with Hilbert van der Meer and his visitor, Julia Tampubolon, to the University Library of Leiden. Julia was looking for the book of a german missionary, Friedrich Eigenbrod. He wrote a story about the conversion to christianity of her great-grandfather, Sarbut Tampubolon; however the story was written in or had been translated to the "Batak-Toba" language. So, Julia had to tell us what Eigenbrod had been writing about. 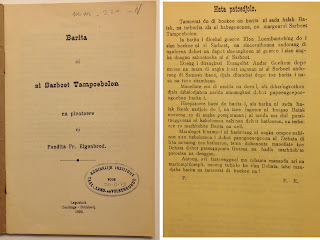 The book about Sarbut Tampubolon, written by F. Eigenbrod in Batak language, found in the University Library Leiden.

She told us that the book described how the father of her great-grandfather, Guru Sumillam Tampubolon, had dreamed about his newborn son: that he would become someone to be respected and well-known with great influence towards other people because he would have charisma and power. So Sarbut became spoiled by his proud father in his very early age, even as a gambler and when he made “trouble”. Later, Sarbut became a leader, fighting with his Aceh comrades against the Dutch, burning churches  and  dutch army posts in the area of Toba. He was exiled to Padang and Aceh by the Dutch. He had to go into hiding in a cave on the shore of lake Toba. He fought together with Sisingamangaraja against the Dutch
{From Wikipedia: "Sisingamangaraja XII (1849 – 17 June 1907; "raja" means king), was the last priest-king of the Batak peoples of north Sumatra. In the course of fighting a lengthy guerrilla war against the Dutch colonisation of Sumatra from 1878 onwards, he was killed in a skirmish with Dutch troops in 1907. He was declared a National Hero of Indonesia in 1961 for his resistance to Dutch colonialism."}
During his wanderings Sarbut met the famous Lutheran missionary Ludwig Ingwer Nommensen, who "adopted him as a son".

Sarbut died on 11 September 1905; he had a son named Pamilang Tampubolon; his son was Guru Tiodorus Tampubolon, who married Lena Sitinjak. They had four sons and four daughters, of whom Julia is the youngest. They represent the 17th generation of the Tampubolon family.
Julia was born in a village called Harianboho on the western shore of lake Toba.

Houses and rice fields (2012) near Harianboho, the birth place of Julia Tampubolon.

Modern Kebumen
Kebumen is now a town with more than 1 million inhabitants. I found a web site about modern Kebumen and Julis helped me to translate it. 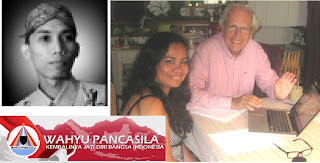 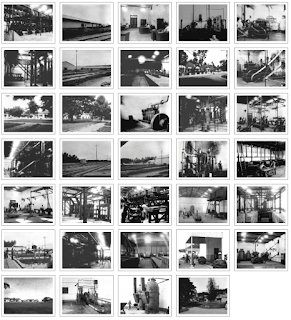 Photographs of the Copra factory in Kebumen (1860-1930) from the Tropical Institute (KIT) in Amsterdam. Many of these prints were also in my father's archive. Web site Ravie Ananda: http://kebumen2013.com/foto-pabrik-mexolie-kebumen/

On his web site Ravie Ananda describes how the Copra-factory in Kebumen developed from ~1860 to the 1920s. In the 1930s there were 3 classes of houses for those who worked in the factory. The houses were built in a classic european style. For the core staff they were located west of the factory. For ordinary employees 25 units were built, each containing a well. There were also public lavatories with wells. For covering the roofs, tiles were made with tile-press machines imported from Germany. Besides these houses many other buildings have been built as indicated on hand-drawn map of my parents. 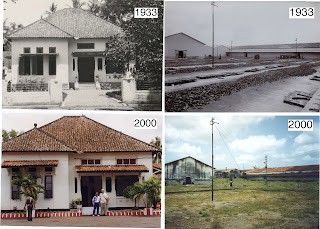 Left: With the help of a picture of 1933, we found the house of my parents when we visited Kebumen in 2000. It had become a military post. Right: The buildings, the drying fields for the copra and the electricity poles have not changed much....

From 1961 to 1972 the production of copra-oil increased again, giving more work to local people. The factory also produced ice blocks. However, in 1986 the Mexolie (now called "Sari Nabati", meaning pollen oil) went bankrupt. Machines, steel frames and lorries were removed and sold. The factory was used for the storage of, for instance, sugar products. It was neglected for about 25 years.
In the past years, reconstruction plans are being carried out for the development of the factory area. There are plans to make an amusement park, but also a library and a museum, a recreation place for children, a sports center, swimming pool and a hotel. On the picture below a section of the drawing from 1934 is being compared with a section of the GoogleEarth map of April 11, 2013 from Kebumen as posted by Ravie Ananda. The green area belongs to a military post, the red area to the former Mexolie/Sarinabati factory. 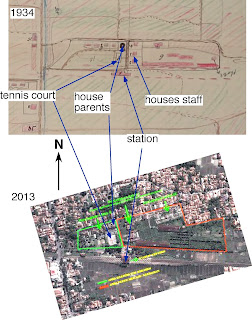 Comparison of the drawing of 1934 with the map from GoogleEarth, slightly tilted to a similar position. The North now points upward.

When all the building plans become realized, it remains to be seen what will remain of the old buildings and houses of the Mexolie/Sarinabati factory. According to some people these buildings can be considered to represent the historical and cultural heritage of modern Kebumen. 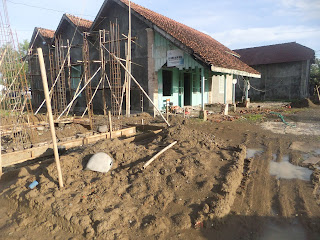 New buildings (a hotel?) are being constructed at the factory site.
This picture was taken in April 2015, when Channoch M. visited the town where he was born in 1940.

I represent kebumen's people said thank you from the bottom of my heart and feel deep respect to your concerned about Mexolie and Kebumen, while have the historical value for you and your father to. and we feel don't have todo to conserve and understanding for more about mexolie and kebumen history, while about 99% of mexolie building will build into new fuction.

Our life is not accidental, god have the super plant who we have reconcilable by internet. I was born in the housing of mexolie about 35 years ago where my father is a worker in mexolie since 1978 until the mexolie closed in 1986, and we stay in mexolie until 1994 and now my house in garuda st 13, its about 700m from mexolie. when I was a child many mexolie worker's children come to mexolie once on a year.

My great grandmother went to surimane in 1921 and died there, before die my great granmother have new life and get childs in suriname, and now some of them stay in Netherlands. i'm already send some photo to your email.

Dear Ravie Ananda, thank you very much for this comment.
So, both our fathers have worked at the oil factory in Kebumen, both in the colonial and in the post-colonial time.
With my warmest regards,
Conrad

Your father is maestro